After 15 years, facebook is changing its corporate look. For the past year, they have been in brand development stage to solidify the corporate entity that includes facebook.

Starting as a website, facebook quickly evolved into the app that we all use today. The rapid adoption by the masses of, at that time, The Facebook was the birth of the social media explosion.

Since then, facebook has added more apps and entities to their brand family that include Messenger, Instagram, WhatsApp, and more. Facebook was even at the ground level of cryptocurrency with its own virtual reality division called Oculus.

Recently, the company “facebook” decided to take their first step into showing the world the new company brand that will now be FACEBOOK.

Does this all seem a little confusing? The key was to use the new identity in all caps which was to signify FACEBOOK as a company, while the lowercase “facebook” will remain as the app and desktop site. Nothing within FACEBOOK’s existing corporate structure will change and it will still look the same from the application side. 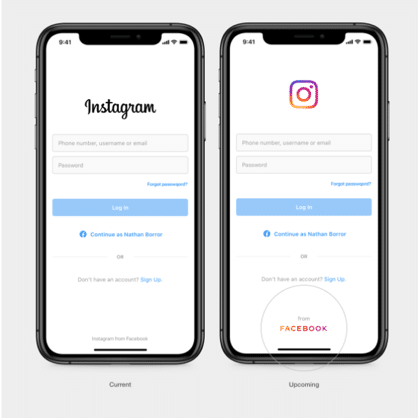 Facebook’s goal was to re-establish its identity as it evolves into a more complex corporation. When one hears the term ‘Facebook’, they immediately think about the app. The app is just a subset of the company which is what they are wanting to clarify. They are hoping that the brand change will better communicate their corporate ownerships to those that use their services to share, connect, and build communities.

What do you think about FACEBOOK’s new look?